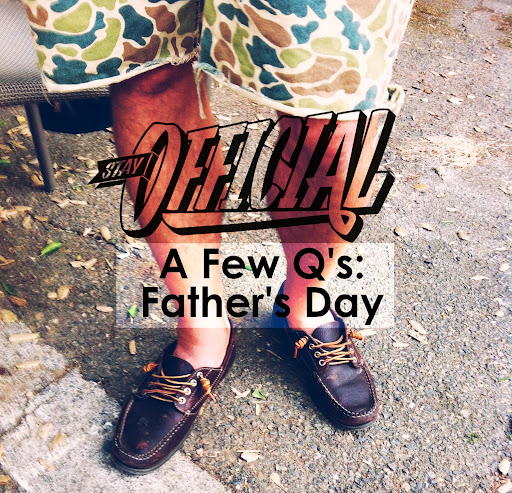 Words and photos by Samuel Stevenson

I've always felt like Father's Day never really got the proper shine it deserved- Not at all to knock the holiday's female counterpart, but Papa deserves to have his day in the spotlight as well. Perhaps this holiday doesn't get as much attention because Dad is a more simple man who would more likely get mad at you for spending money on a made up holiday. Or maybe because there is an inescapable truth that there are more absent dad's than great ones. This, however, makes the great ones true treasures in the family unit and in our society as a whole. After all, it is these great father's that will mold great men and women who will then follow suit with their children.

For this feature, I sat with the three great father's in the Official Crown of Laurel family to ask them a few q's on being a father.

We start with Big Papa: Jason, the father of Official Crown of Laurel and three wonderful daughters as well. When you see J interact with his family you can tell that his position comes as 2nd nature to him; the dude just gets it. In the last couple years he has welcomed his third daughter to the world, his first baby since his middle daughter was born- I wondered how that transition was. Seen here with his youngest, Berlin. Not pictured: Mykah and Zo

Sam: Is it weird starting all over again with a baby after 10 years? I guess once a Dad,

Jason: I just don't think of it that way- maybe it would be if I thought of it that way. To me, every kid is different too so she's just a different little human being- she has her own character and what not. [Being a father] is a commitment- it's another new commitment, that's for sure. It's kinda weird when people are like "Yeah only 18 years.." but it's like dude you're going to care for your kid for the rest of your life

S: How different would it be if you had 3 boys?

J: I don't even know what it would be like having boys. I think it's more relaxing having a daughter; boys are going to break bones and not do good in school y'know? Where Jason is unexperienced with having boys, Josh is on the road to becoming an expert. Josh and his family are long-time members of the Official family; from his early beginning working with Jason on past projects, to his wife taking on the position as Official Office Manager. Josh's adaptable personality and eclectic taste in arts, culture and music make him a well-rounded father figure to his son, Julian. Josh and his son Julian

Sam: What's the best part about being a father?

Josh: When you're child laughs, hysterically.

S: What do you like most about being a father?

J: The thing I like most about it is I know that I have the opportunity and responsibility to create someone who is a productive member of society at some point.

S: What would be different if you had a daughter?

J: I'm already a pretty anxious, neurotic person. That would probably be multiplied by about 13 if I had a daughter. Rick just gets it, dude. I actually joke all the time that I want Rick to adopt me and teach me his zen-like way of living (still waiting on the paperwork to go through.) Rick is the newest father out of the three dad's featured here today but much like the Jason and Josh, Rick is a natural. He is a calm and collected man who has a solid appreciation for being a father; when in the presence of his son, Oliver, the pure joy and stoic pride shines through his face. Unfortunately, I wasn't able to get a portrait of them together but Rick's Q&A was too good to pass up.

We'll just go ahead and assume that Rick is admiring a picture of his son.

"...it's just more like the science project of it all."

Rick: It's crazy dude, it's a roller coaster for me. One day you're out in the world and you're stoked [on your son] and the next day you're just like, "Dude, are you serious?" But at the end of the day it's just so tight [to be a dad.] I'm juiced though, I've learned to adapt.

S: Yeah, I couldn't imagine being a Dad right now.

R: It's like when they're first born they don't have really have a personality, they're just crying all the time and you have to cater to whatever they need. Then when he was 6 or 7 months old he started becoming like a little dude- that's when I was like, "Alright dude, you won me over." [Laughs]

S: What's your favorite part about being a dad?

R: I think it's just more like the science project of it all. Just seeing the reality of what this little dude can do; in just two years time he's learned so much shit. I think I like that aspect a lot- the development. But also, the shit you can't put into words y'know? The small stuff; the high-fives!